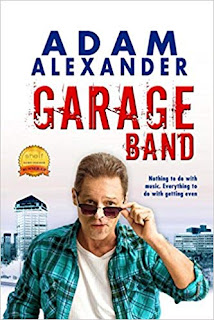 Summary:
After helping to build the Eastland Insurance company for 17 years, Lanthus Trilby is retrenched without warning, to make way for “younger, brighter” minds. Angry and betrayed, the passive actuary wants to let his boss feel his rage. His initial plans of keying his boss’ car escalate beyond merely blowing it up. Lanthus is going to take down the entire company. But his plan needs a team with special skills.


The hacker, the daredevil, the explosives expert and the acrobatic pair join Lanthus to pull off the most daring caper the world has ever seen to bring Eastland Insurance to its knees.

But as soon as than the plan begins, trouble sets in. The police are closing in, and someone else wants a piece of the action. Can Lanthus keep it together long enough to pull off his master plan? 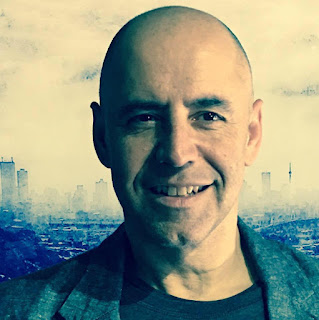 Adam Alexander is a multi-talented writer who has demonstrated his skill across multiple genres. His characters are just real enough to fall in love with, and just dark enough to doubt. His books have begun to gather international acclaim. Garage Band was among only a handful of titles to be nominated as runner up in the Shelf Unbound Best Indie Book of the Year competition, and the same title received a glowing Reader-s Favorite 5-Stars. 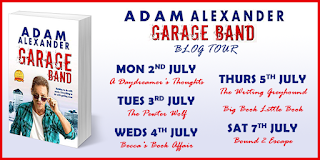 Saturday 7th July
Bound 2 Escape
My Thoughts:
Nothing to do with music. Everything to do with getting even.
The Cover: The working cover that I got for this book was  different from the Goodreads cover. It showed an average looking guy, sunglasses, flannel shirt over a white t-shirt, with a city scape behind him. The cover was definitely not what caught my attention with this book. The Goodreads cover is a lot different and in my humble opinion, a thousand times better! Looks like a rolling metal garage door, graffitied with the book title and tagline, open slightly, showing feet on the other side. And a smiley faced lit bomb in the forefront. Considering this book is the bomb(in my opinion), this is a much more suitable cover.
The Plot: Holy garage band, Batman!! This book absolutely rocked. I have read revenge stories, but this one was to the extreme. There were so many details and senerios tied up into this beautifully written package, so many little surprises. I spent a lot of it going, 'crap, their gonna get busted!' (In my head, of course. I'm not crazy- okay maybe just a little) But this writer had every twist, turn, and shocker down to a science. Every time I thought something would happen, something entirely different and so much better would take place instead. I really was hooked right from the beginning.
The Characters: Our cast of Garage Band was amazing. I loved every single character, good guy or villian. And let's be honest, with this kind of story, it's hard to tell who is good or bad.  You want our main man, Lanthus to get his revenge, but you want to obey the law-oh wait! Nope, scratch that! Everyone wants to see the big corporations brought to rubble!  I think Jason and the Lovers were my favorite characters. Jason because he was just trying to do what was best for his sister and the Lovers because...well, acrobats! Who commit crimes against injustice! All of the charcters are well written and likeable, well except for villains like Leroy, oh and Charles Wagner.   You just feel slimy reading their parts and can't help but want to see them get beaten.
Was It Worth Reading?: Yes!! It is definitely entertaining. It was an easy, fun read, filled with laughs that makes you wish you had thought of taking revenge on a few old bosses. I highly recommend Garage Band to anyone and give it 5 out of 5 crossbows!
Posted by Becca's Book Affair at Thursday, July 05, 2018