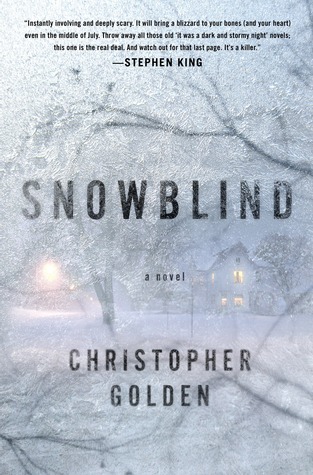 In Christopher Golden’s first horror novel in more than a decade--a work reminiscent of early Stephen King—Snowblind updates the ghost story for the modern age.

The small New England town of had weathered a thousand blizzards...but never one like this. Icy figures danced in the wind and gazed through children's windows with soul-chilling eyes. People wandered into the whiteout and were never seen again. Families were torn apart, and the town would never be the same.

Now, as a new storm approaches twelve years later, the folks of are haunted by the memories of that dreadful blizzard and those who were lost in the snow. Photographer Jake Schapiro mourns his little brother, Isaac, even as---tonight---another little boy is missing. Mechanic and part-time thief Doug Manning's life has been forever scarred by the mysterious death of his wife, Cherie, and now he’s starting over with another woman and more ambitious crimes. Police detective Joe Keenan has never been the same since that night, when he failed to save the life of a young boy . . . and the boy’s father vanished in the storm only feet away. And all the way on the other side of the country, Miri Ristani receives a phone call . . . from a man who died twelve years ago.

As old ghosts trickle back, this new storm will prove to be even more terrifying than the last.

Snowblind blindsided me. I very much enjoyed it. It was difficult at first to follow all the characters and just when I started to believe there were too many, they all connected and made sense.
First, I must share how connected I became to this story. I live in , not quite in igloo country, and while the characters in this story were preparing and then weathering a major storm, we were struggling through a major cold snap. So this was a bit surreal. But the storyline was absolutely chilling, the characters were very well written and developed and the combination made for an amazingly thrilling experience. I will never look at a blizzard the same way again.
I loved the way all the characters connected, their storylines entwined. I also loved that some things in the mystery fell into place smoothly while other parts left you guessing. All the answers were not simply given, some of them you really had to think about.
Mira and Josh were my favorite characters. Young lovers each destroyed by shared losses. Will the future bring them to heal together?
I loved Joe Keenan, the detective who’s job was his life. The first storm showed him things he prayed never to see again, but rather than quit his job, he became a detective, determined never to lose anyone again.
This was a stand alone and I am glad and sad at the same time. Could any town be asked to go through these horrors, not once, not twice, but three times? That would be exceptionally cruel. But it is such a well written story, with characters that seem so genuine; who would want to leave the little town of behind?


I definitely recommend Snowblind to readers of fantasy, paranormal, and horror.