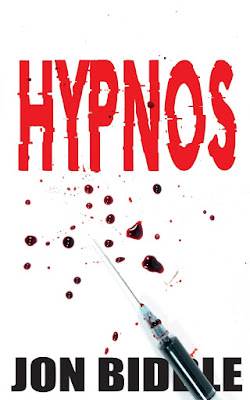 What if the unthinkable became a reality? What if technology could be used against you?


A software program has been stolen from the digital vaults of the CIA. It is capable of bridging the gap between A.I. and human consciousness, making a person do whatever the controller wants, creating a potentially terrifying new world. The organisation responsible has racist, right-wing views and a perverted desire to reduce population growth by culling it using the software. Only the rich and the powerful can be part of Asclepius. The software is uploaded to the brain via eye movement using a smartphone, leaving open the possibility for entire countries to be controlled remotely.


Alex Brown, newly-appointed to the B5 Intelligence cell of British intelligence while hunting for the serial killer Dale Broc who has kidnapped her daughter, has been assigned to the case and now has to choose. Will she save the country or her daughter?


Hypnos is the second novel in the Alex Brown series. Author Jon Biddle brings extensive medical knowledge coupled with military and law enforcement experience that combines to produce an exciting sequel to The Harvester. 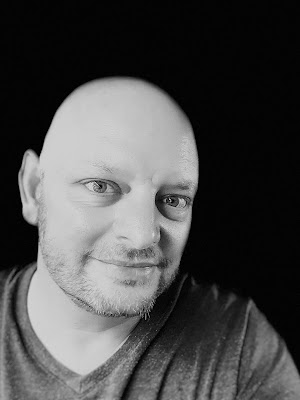 
A veteran and a medical professional who spends 45 hours a week in the OR, Jon brings considerable medical and military/law enforcement expertise to the crime thriller genre, evident by the attention to detail in his six books.


Jon's writing is dark and eclectic, provoking and deviant. He surrounds himself in the white glow of pureness, with one foot always in the dark. The dark always surrounds us, but Jon has a knack of making his readers ask "Could this happen to me?"


There is nothing too dark for Jon to write about. He has no level, base, or filter, and will get into your head and "scare the living daylights" out of you.


Jon lives in the south-west of England with his childhood sweetheart, Sam, and two Springer Spaniels. With full-time medical responsibilities in his day job, Jon spends 15-20 hours a week writing for his growing online audience. His new medical thriller, The Harvester, was released in 2019 as the first of six books in the Dale Broc series.


Find out more about Jon Biddle, including his new releases and regular short stories, by going to www.jonbiddle.uk and joining the mailing list. 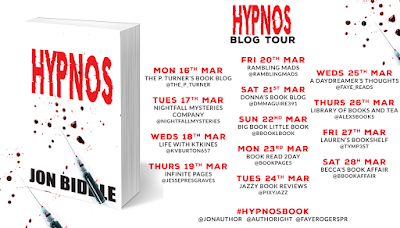 The Cover:
I definitely didn't choose this book based on the cover. I really don't like it at all. I am not sure if I missed something and I guess blood is pertinent to the story, but not sure about the needle.

The Plot:
Hypnos was an amazing story about a terrorist attack on the world essentially. Over population is a subject that is getting more and more prevalent, but a secret organization decides to take matters into their own hands. The story flows really well, keeping the reader on the edge of their seat.

The Characters:
All of our characters are very well written with interesting backstories. Jamal is one of my favorites with his kickass smarts and the technology to match. The fail safes that he puts in place to protect himself are absolutely mind-blowing. Our pair of detectives, Mr. Bloodstone and Alex Brown are a pretty kickass team on their own, although Alex really didn't become near and dear to me. I know she was going through some stuff in her life with her daughter and then her husband as a direct result, and she is also put through the wringer in this story, but she just seems to kinda float along.

Was it worth Reading?:
Absolutely! Hypnos is a great story that keeps you reading late into the night. It has that horror factor where you just can't look away. I am looking forward to reading Jon Biddle's other books, but right now I highly recommend Hypnos and give it 5 out of 5 crossbows.