Hope you are all well and enjoying these last weeks of summer. I know the kids are swimming as much as the weather allows and we are walking quite a bit, as we have a 5 month old Alaskan Husky, who bounces off walls if he doesn't get
his exercise. This last week, I have been continuing to deal with health issues of a close family member, but reading Divergent as much as possible. I tell you, I absolutely loved the movie, so I had to read the book. Its taking longer than it would usually, but I am hooked for sure. I will be posting reviews for all three of them as soon as I finish them. In the meantime, I will be posting some of my older reviews,because good books always deserve a share. So, because I have been craving a good dystopian or apocalyptic type story, I present Wasteland by Susan Kim and Laurence Klavan. I really enjoyed it and although I have not read Wanderers, which came out in March of this year, Wasteland has always stuck with me. Let me know what you think of it. 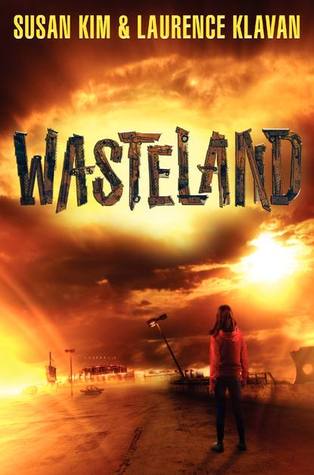 Welcome to the Wasteland. Where all the adults are long gone, and now no one lives past the age of nineteen. Susan Kim and Laurence Klavan’s post-apocalyptic debut is the first of a trilogy in which everyone is forced to live under the looming threat of rampant disease and brutal attacks by the Variants —- hermaphroditic outcasts that live on the outskirts of Prin. Esther thinks there’s more to life than toiling at harvesting, gleaning, and excavating, day after day under the relentless sun, just hoping to make it to the next day. But then Caleb, a mysterious stranger, arrives in town, and Esther begins to question who she can trust. As shady pasts unravel into the present and new romances develop, Caleb and Esther realize that they must team together to fight for their lives and for the freedom of Prin.

Wasteland is an entertaining apocalypse story. Ester and her sister
are residents of Prin. Sarah is 18 years old, not partnered and has no children. She is an old maid and will die alone…at 19. This is the way it is in Prin. Provided you manage to avoid starvation or acid rain or variant attacks. Esther has been lucky so far. But the townsfolk don’t really like Esther. She skips to many work details and she is defiant. She will probably end up like her sister, alone with no children. But that’s okay to Esther. She has bigger and better things to do with her time.
Levi lives at the source, a place where all the food, water, and other stuff is stored. Levi is in charge of basically everything from assigning work details to giving out the food, water, and everything else the citizens need. Then the stranger comes to town and everything changes.
I very much enjoyed every moment of Wasteland. The only part I found frustrating was that there didn’t seem to be an explanation for how things got to be the way they were. But if the society didn’t know, then it made sense that we wouldn’t find out. I did like that the lovely golden arches we all know as McDonalds, does exist in this world, but its doubtful that any food there is edible.
Esther would have to be my favorite character, as she is strong, defiant, and self-sufficient. Her and Caleb have amazing potential to do great things, even if I do believe it was a little far-fetched how quickly things moved for them. But I guess when you only have so many years to live, things have to move quickly.
I would definitely recommend Wasteland to fans of apocalypse or dystopian stories, as it was another one I could not put down. It flowed at a steady pace; the characters were all very well developed with good subplots of their own. I anxiously await the next book in this trilogy by Susan Kim and Laurence Klavan.