Hello and thanks for joining us on our stop of the book tour!! Here you will find info about not one, but two awesome children's/ middle grade fiction stories. My daughter and I decided to read these together and we absolutely loved them! She says they are really entertaining and easy to read. She really liked them and believes other kids would. too. Even my 12 year old secretly listened when my daughter and I would snuggle on the couch, reading alouded to each other. The characters are entertaining and relate-able, while the story moves along at a good pace that held everyone's interest. We highly recommend The Rabbit Ate My......series and give it 5 out of 5 crossbows. 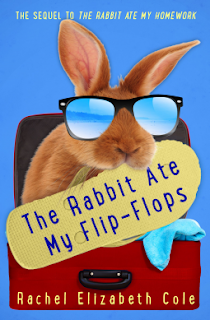 About the book: You can’t bring a rabbit camping. That’s what eleven-year-old Drew Montgomery’s grandparents say when his annoying little sister wants to bring their pet rabbit, Tiny, along on the trip. And Drew agrees. It's bad enough that he will miss the release of the coolest video game of the year while he's stuck in a cramped travel trailer for a week with his grandparents and sister. But Tiny is certain to cause trouble. Plus there are bears and eagles in the woods. And what if Tiny gets lost?

But Libby smuggles the rabbit into the trailer anyway. Now Drew’s got to keep Tiny out of trouble. And that’s not easy to do with Libby always letting him out of the cage and a pair of rabbit-hating bullies ready to let their dog chomp him if he gets too close.

Top it off with never-ending rain, bloodthirsty mosquitos, a broken toilet, stinky outhouses, angry squirrels, terrible food, and an eye-gougingly boring “schedule of activities.” Drew is about ready to take the rabbit and hitchhike home before disaster really strikes.

Get the book: Amazon 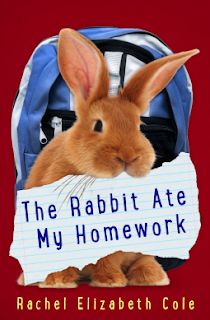 About book one: Eleven year-old Drew Montgomery has not, does not, and will not ever want a stupid old rabbit. All they do is sit in their cages, eat carrots, and poop. Then his annoying little sister blackmails him into hiding a bunny in his closet. She knows what really happened to his "stolen" bike and she's threatening to tell. Now Drew’s in a real jam. If his "No pets!" parents find the rabbit or, worse, his sister blabs the truth, he'll be grounded till grade seven for sure.

And if that’s not enough trouble, two girls at school drag him into a prank war that goes from bad to worse--and it's all the rabbit’s fault. Plus, the weirdest girl in his class wants to be his science partner. If she tells him she wants to be his girlfriend, he just knows he’s gonna die.

Drew must find a way to outwit the mean girls, wiggle out of the blackmail deal, and get rid of the rabbit before it destroys his bedroom and his life.

About the author: Rachel Elizabeth Cole writes a mix of genres, from heartfelt to humourous--but her favourite will always be middle grade fiction. Her short stories have appeared in literary magazines both online and in print, including Cahoots, Literary Mama, and Flashquake.
When she's not writing, Rachel works as a graphic designer specializing in book covers. She enjoys refurbishing old furniture rescued from thrift shops and garage sales, puttering in the garden despite her lack of green thumbs, carving down the local mountains on her snowboard, or shouting at the TV during Hockey Night in Canada. Her favourite season is autumn, she prefers tea to coffee, and wishes every morning began at ten a.m.
Born on Vancouver Island, she's had a life-long love affair with its rugged coasts and windswept beaches. Many of her stories are set there. She hopes to return to ‘the Island’ one day, but for now she lives just outside Vancouver, British Columbia, with her husband, their two sons, and two very spoiled house rabbits.