Surrender the Dark (The Dark #1) by Tibby Armstrong

Hi, and welcome to my stop on the tour!! Thanks for dropping by! Today, you will find info on the book, the author, Tibby Armstrong, and of course, My Thoughts (cause I love sharing great books!!!) 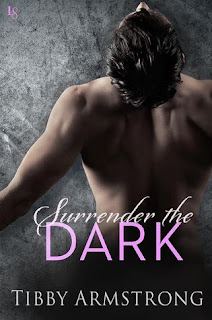 Goodreads Synopsis
As a provocative series of paranormal temptation begins, a vampire king seduces the supernaturally gifted man hunting him. But when the stakes are literally life or death, their struggle for control is no game.


Benjamin Fuller is a hunter, born and bred. Blinded as a child by the vampire who slaughtered his family, he’s blessed with a second sight that allows him to catch and kill his quarry. What his gift can’t help him see coming is his fierce, almost carnal attraction to the mystery man who claims to be a fellow hunter and whose touch triggers both lust and revulsion. When he gains the upper hand, Benjamin vows to bring his enemy to his knees.

After many years spent in exile, the only one who can help restore Tzadkiel Dragoumanos to his rightful place as War King is a blind hunter with golden curls, a lithe dancer’s physique, and distinctive facial scars—scars Tzadkiel gave him two decades ago. The mere scent of Benjamin Fuller provokes an unwelcome rush of insatiable desire. Yet to win an all-out supernatural war, Tzadkiel must resist the ravenous hunger to possess his prey—for now.


My Thoughts
The cover to Surrender the Dark leads the reader to believe it is a very specific kind of book. Erotica. And while there were some very steamy love scenes, it was so much more than that. It was a story of love and betrayal, adventure and danger, friendship and age old hatred.  I devoured this story like a disaster survivor might inhale their favorite food. I could not get my fill, fast enough.

I immediately fell in love with our troubled protagonist, who really did come off as, well an ass. But Nyx and Akito became my favorites. All of the characters were very engaging and appealing, giving the reader a sense of being in the story, a part of it even. Even Boston held a certain charm.

I couldn't help but hope that there will be a follow up to Surrender the Dark. The story ended with the war at an impasse. But until then, I highly recommend Surrender the Dark and give it 4 out of 5 crossbows.