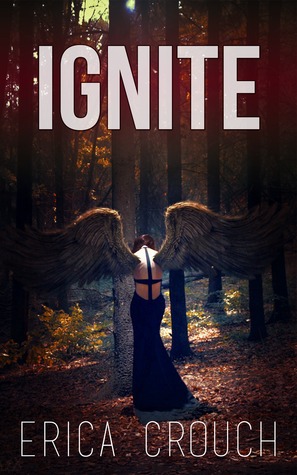 Penemuel (Pen) fell from grace over a millennium ago, yet there are still times she questions her decision to follow her twin brother, Azael, to Hell. Now that the archangel Michael has returned, threatening Lucifer’s vie for the throne, she begins questioning everything she has always believed.
As Hell prepares for war - spreading a demonic virus and pilfering innocent souls to build an army - the lines separating the worlds blur. Fates erase and the future is left unwritten. Azael is determined that he and his sister will continue to serve as demons together, but for the first time in her life, Pen is not ruled by destiny. She has the freedom of choice.
With choice comes sacrifice, and Pen must decide which side she’s willing to risk everything fighting for: the light, or the dark.

My Thoughts:
I was totally amazed by Ignite. Erica Crouch has crafted an extremely well-written tale of angels and demons, heaven and hell, good vs evil. An old concept, but with a fantastic twist.
I loved Penemuel, Pen to those who knew her. She was quirky, brave, and endearing; that good girl trying to be bad for her brother, Azael’s sake. I think this was one of the reasons I did not like Azael. He was very selfish and could not even think about his sister long enough to see that everything she did was for him. Oh, that, and he was mean, arrogant, and plain evil. He totally enjoyed being a demon and fully belonged in hell.
The concept of Michael’s soul being rescued from hell and the archangel having to grow up again was a pretty cool twist. Definitely something new. Michael falling for Pen was just icing on the cake. Can Pen go good for Michael? Or will Michael loose those lovely white angel wings and join the dark-side. Time will tell or rather the next book in the Ignite series will.
The storyline to Ignite was very well written, keeping me on the edge, turning pages late into the night. I love a good supernatural story and Ignite fulfills with angels and demons, and that age old fight between heaven and hell.