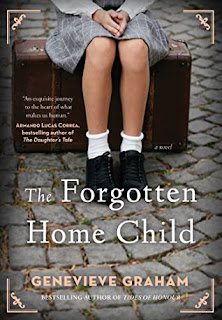 The Home for Unwanted Girls meets Orphan Train in this unforgettable novel about a young girl caught in a scheme to rid England’s streets of destitute children, and the lengths she will go to find her way home—based on the true story of the British Home Children.

At ninety-seven years old, Winnifred Ellis knows she doesn’t have much time left, and it is almost a relief to realize that once she is gone, the truth about her shameful past will die with her. But when her great-grandson Jamie, the spitting image of her dear late husband, asks about his family tree, Winnifred can’t lie any longer, even if it means breaking a promise she made so long ago...

Fifteen-year-old Winny has never known a real home. After running away from an abusive stepfather, she falls in with Mary, Jack, and their ragtag group of friends roaming the streets of Liverpool. When the children are caught stealing food, Winny and Mary are left in Dr. Barnardo’s Barkingside Home for Girls, a local home for orphans and forgotten children found in the city’s slums. At Barkingside, Winny learns she will soon join other boys and girls in a faraway place called Canada, where families and better lives await them.

But Winny’s hopes are dashed when she is separated from her friends and sent to live with a family that has no use for another daughter. Instead, they have paid for an indentured servant to work on their farm. Faced with this harsh new reality, Winny clings to the belief that she will someday find her friends again.

Inspired by true events, The Forgotten Home Child is a moving and heartbreaking novel about place, belonging, and family—the one we make for ourselves and its enduring power to draw us home.

A little girl sits on a suitcase, hands folded neatly in her lap. Maybe Winny,  waiting at the train station. I love the colors of this cover. It tells a sad story in itself of a child, who came to another country in hopes of finding the loving home and  family she did not have in England.

The Forgotten Home Child is a touching story of a group of children taken from the streets, placed in orphanages and then sent to Canada to work in homes, hopefully for a better life. Based on true stories, it weaves a tale of how more often than not, those children ended up in horrible situations with no hope of rescue. I could not stop reading Winny's story, sharing in her heartache and her triumphs, praying for her happy ending.

Our family of orphans are easy to fall in love with right from the beginning. They are very well written, each with their own trials, but all just trying to make it through the day. They were all lovable characters, with Winny and Mary being my favorites. Their personalities seemed to be opposite, but they supported each other as best as they could throughout their heartaches.

Was it Worth Reading?:

Yes, please go read this book. Until I found it, I had no idea such a scheme had taken place. It is one of those things in history that is buried deep, shameful and forgotten. So, yes, Read the story, learn everything you can about this dreadful period and share it whenever and wherever you can. I highly recommend The Forgotten Home Child to readers of historical fiction and give it 5 out of 5 crossbows.