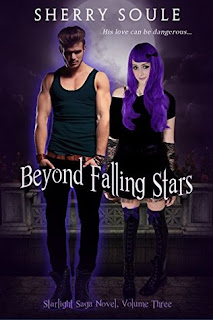 Being hunted by alien mutants totally sucks. And the threat of imprisonment in a secret underground lab? Even suckier.
Now that Sloane Masterson’s blackmailer has been revealed, and she knows the truth about why Hayden’s been so secretive, she’s ready to put all that epic craziness behind her.

Besides, Sloane has bigger problems to deal with, like protecting her family from Sector Thirteen and getting Hayden’s snobby parents to accept her as one of them. And what better way to win over the ’rents and evade ST than an intergalactic vacay with her smoking’ hot boyfriend?

Sloane and her bestie, Viola Saks, are invited to join the Lancaster brothers for a twisted family reunion on their home planet, an oasis of wicked cool beaches, warm dual suns, and clear blue seas.

But danger lurks in paradise. . .

Even in this beautiful utopia, Sloane and Hayden’s relationship is never far from higher levels of suckage. They might be vacationing in a galaxy far, far away, but someone still wants her dead.

My Thoughts:
The Cover:  I loved the colors in this cover; so very vibrant, even though they were very dark. I honestly felt that the cover was a little along the lines of Sabrina, Teenage Witch meets Buffy the Vampire Slayer. But I really liked it.

The Plot: What an amazing story; who doesn't want to vacation on a far away planet that's similar to Earth, but different. Riticuli really did some like a paradise....if a paradise was scorching hot with two sun's. Okay, maybe not a fantastic vacation spot for someone who burns after 5 seconds in the sun. Beyond Falling Stars was still a very well written book with lots of mystery, intrigue, danger, and romance. The plot twists were perfect and unexpected. Just when I thought Sloane and Hayden would finally get their happily ever after, something totally out of the blue happened and they were in the thick again.

The Characters:  All too often when I read a YA book, the supporting characters are just there, with basic details. And I am just like, meh. I have no love for them, no hate. It's just like whatever. But the supporting characters in Beyond Falling Stars rock. They are well written and the illicit some feeling in the reader, whether it's anger or excitement or humor. All of the characters in this series have been amazingly written even the villains. It has been pretty wild watching both Sloane and Hayden grow as characters.

Was it Worth Reading?: Oh yes!! This entire series has been so much fun to read. I really do hope that Sherry continues to write more adventures for Sloane and Hayden. I highly recommend the Starlight Saga to readers of YA, drama, and romance and give it 5 out of 5 stars.