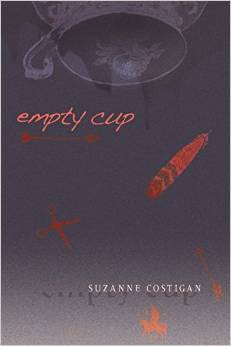 Thanks for joining me on my stop on the Empty Cup Blog tour. I hope you have enjoyed the tour so far! Empty Cup is one of those books that has some intense drama, but is sooooo good! Very intense, but very well written! If you haven't read it yet, get a copy.

Mom’s new boyfriend is creepy.
On the night of her seventeenth birthday, Raven finds out he isn’t just creepy, he’s dangerous. He leaves Raven broken and bleeding, but Mom blames her for what happened. She kicks Raven out of the house with nothing but a blanket to protect her from a frigid winter night.

As Raven struggles with the aftermath of the ultimate betrayal, she seeks solace in her imagination and a teacher who seems to understand her situation. She ultimately discovers that her world won’t change if she relies upon someone else to do it. Real change begins within.

The Cover: I thought that while this was a very nice cover, it just did not do justice to the story. Yes, it is a dark story, and I love the empty cup metaphor, but I thought this story just needed a very different cover. I did not read this book based on the cover, it was the synopsis that grabbed my attention and made me want to read it.

The Plot: Empty Cup is a very well-written and very realistic story. It deals with some issues that are very real with today's teens. While very scary at points, it is very thought-provoking and shows how easy it is to make mistakes. The plot line has a good pace and the author is descriptive enough that you, the reader, feel a part of the story. You feel the terror, apprehension, and insecurities of a teenaged girl who has been abused and neglected all her life.

The Characters: Our characters are fairly well-written, although I wish there had been more of a build up, more background to show who they really were. All of our characters faced some very tough situations that teenagers should not have to face. Yes, some choices are not the right ones, but when you do not have a parent to teach you right from wrong, how are you supposed to know? Our characters are very real, honest, and relateable.

Was It Worth Reading?: While Empty Cup was not the type of drama I typically would get into, I really did like this book. I hesitate to say enjoyed only because of the nature of the book, but it was a very good book. I read this book in one day, it was just that intense and flowed so well. I highly recommend Empty Cup to readers of YA drama and give it four out of five crossbows.