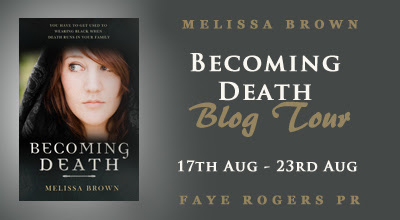 Hi, and welcome to my stop on the tour!! Thanks for stopping in today! You will find info on the book, the author, Melissa Brown, and of course, My Thoughts (cause I love to share!!). Oh, and make sure you check out other stops on the tour for author interviews, guest posts, and lots more fun! 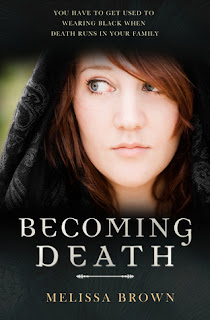 Summary:
Ever since her father's demise, Madison Clark knew death had her number. After losing her first job, she is ushered into the cryptic family business. Little does she know her family is hiding a dark secret; they are grim reapers, custodians of souls on their journey to the beyond. Madison expects her historic legacy to have benefits beyond immortality. What she doesn't expect is to still be struggling for cash while reaping souls on the side.

As if being Death's minion wasn't strenuous enough, Madison finds herself back at school with her worst enemy studying the ancient rules, methods and paperwork of her vocation. In a cascade of life changes: her best friend admits he’s in love with her and she starts a new job as a professional mourner, but she can’t help thinking her family might have other secrets.

Just when things are finally starting to feel normal again Death throws her a curveball: her next victim is her best friend. Madison must find a way to overcome the strict guidelines of being a grim reaper in order to save his life. 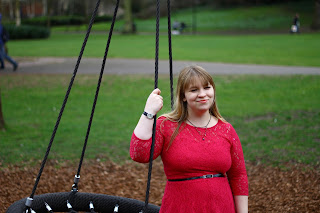 Melissa Brown an American author that lives in Norwich, England. She is a teacher in ICT skills, English and creative writing. In 2014, she was shortlisted for the IdeasTap Inspires: Writers' Centre Norwich Writing Competition and longlisted for the Nottingham Writers' Club's inaugural National Short Story Competition. She was also a featured poet at the Norwich: City of Stories launch event, where she did a live reading of my poem 'The Library.' She enjoys films, books, comics, fangirling and subscription boxes. She blames her love of the written word on her hometown library and fanfiction. She lives with her partner, Kris, and her awesome cat, Hailey.

The Cover: This cover is absolutely beautiful. A young woman, perhaps our protagonist looks over her shoulder, her read hair peeks out from under a black hood. Not really what you would expect a grim reaper to look like, but definitely started me wondering.

The Plot: In a new twist to the typical coming of age stroy, a young girl learns of her family's morbid history and her bleak future. The plot to Becoming Death was fantastically done. A “dromedy” that moves along well with all the morbid little details you would expect if you suddenly learned you were the henchman of death, that's Death-with a capital D. While quirky and a bit out there, Becoming Death has a storyline that rocks.

The Characters: I loved the characters of this book! They were all very well written, characters you can relate to. Our happy-go-lucky protagonist with a string of bad luck, which she sometimes meets with grace, sometimes insanity. Her best friend, who suffers from the ups and downs of her apparent mood swings and her hilarious family, trying to support her through this new part of her life. The characters of Becoming Death make this one of the better books I have read as of late.

Is it Worth Reading?: Hands down, yes!! I devoured Becoming Death in a matter of hours. At one point, my Kobo told me I was 78% through and I didn't believe it! Becoming Death is an extremely entertaining read for fans of YA supernatural drama and I give it 4 out of 5 crossbows!

TOUR WIDE GIVEAWAY
This giveaway is open to UK participants ONLY.

There is also a tour-wide giveaway!