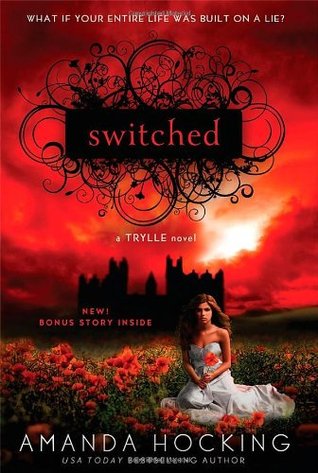 When Wendy Everly was six years old, her mother was convinced she was a monster and tried to kill her. Eleven years later, Wendy discovers her mother might have been right. She’s not the person she’s always believed herself to be, and her whole life begins to unravel—all because of Finn Holmes.


Finn is a mysterious guy who always seems to be watching her. Every encounter leaves her deeply shaken…though it has more to do with her fierce attraction to him than she’d ever admit. But it isn’t long before he reveals the truth: Wendy is a changeling who was switched at birth—and he’s come to take her home.
Now Wendy’s about to journey to a magical world she never knew existed, one that’s both beautiful and frightening. And where she must leave her old life behind to discover who she’s meant to become…

Oh wow, what a book, what a story, what a start to an adventure. This book filled a need I didn’t even know I had or rather I guess it made me aware that I had been missing this kind of story.

Imagine if you will: the stories are true. Changelings, babies switched at birth.  Our protagonist, seemingly a spoiled little brat, is simply a very confused and alone Trylle, trying to understand why no one likes her, why she is so different. Wendy is an amazing character. I really thought she was a totally spoiled rotten little girl. Then, as the fantastic plotline unfolded, I realized, no, Wendy really was different. The story is explosive, filled with mystery, intrigue, action, adventure, and yes, even a little romance. Fin is simply delicious. Wendy and Fin together? Holy wow, what a fire! They just seem to meld together perfectly. The princess and her protector; her dark knight.

All characters were very well created. All had that depth that brings them to life. Both Willa and Tove seem shallow and spoilt at first; well both of them really are spoilt, but as they become more defined and real, their true natures are revealed. I was so tempted to hate the both of them; Willa, quirky and funny; Tove, mysterious and loyal. But by the end, it was impossible.


What a cliffhanger ending, I am very glad I can just pick up the next copy, because I think I might die of curiosity if I had to wait. Curiosity did kill the cat, you know. I highly recommend Switched to readers of YA paranormal, fantasy and romance.