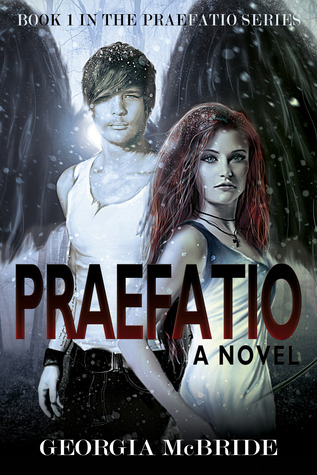 After having been missing for weeks, Grace is found on the estate of international rock star Gavin Vault, half-dressed and yelling for help. Over the course of twenty-four hours Grace holds an entire police force captive with incredulous tales of angels, demons, and war; intent on saving Gavin from lockup and her family from worry over her safety.

Authorities believe that Grace is ill, suffering from Stockholm Syndrome, the victim of assault and a severely fractured mind. Undeterred, Grace reveals the secret existence of dark angels on earth, an ancient prophecy and a wretched curse steeped in Biblical myth. Grace’s claims set into motion an ages-old war, resulting in blood, death and the loss of everything that matters. But are these the delusions of an immensely sick girl, or could Grace’s story actually be true?

Praefatio is Grace’s account of weeks on the run, falling in love and losing everything but her faith. When it’s sister against brother, light versus darkness, corrupt police officers, eager doctors and accusing journalists, against one girl with nothing but her word as proof: who do you believe?
“With Praefatio, Georgia McBride proves that you can take any genre to a higher level. This is teen fantasy at its most entertaining, most heartbreaking, most compelling. Highly recommended.” –Jonathan Maberry, New York Times bestselling author.

The Plot:  The storyline to Praefatio was well-crafted, with some amazingly placed bombshells. While I occasionally had a little difficulty understanding and keeping the angel food chain in order. I really did find that the story moved along at a great pace.

Characters:  The characters were all kick ass and relatable. Some were easily placed for their part in the story; others seem to have a hidden agenda. I didn't particularly have a favorite, maybe Michael for his never-ending patience with our protagonist like she was an irritable toddler that he was trying not to swat on the rear.


Is it Worth Reading?: Definitely! While not my next dying to read series, I definitely loved the angel and demons concepts. The worlds and the ways of both were fascinating. I do look forward to the next book and give Praefatio four out of five crossbows.