The Russian Lieutenant by Peter Marshall 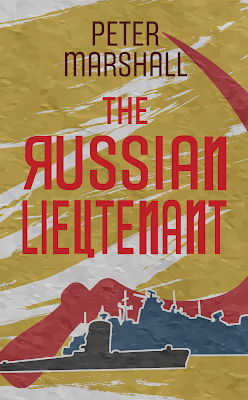 Hi, and welcome to my stop on the tour!! Thanks for stopping in today! You will find info on the book, the author, Peter Marshall, and of course, My Thoughts (cause I love to share!!). Oh, and make sure you check out other stops on the tour for author interviews, guest posts, and lots more fun!

Summary:
When a Russian warship arrives in Portsmouth Dockyard, a handsome uniformed officer strides down the gangway to meet Marina Peters, an English girl of Russian ancestry, who had discovered him on a dating website. She works for the Royal Navy, so they have much in common.


What they do not know is that their romantic quayside tryst is being observed by agents from MI5, leading to a series of dramatic events involving the security services of the UK and USA.


Marina, a bright and intelligent thirty-year-old career woman, has been seeking something new in her life. So it is with a mixture of expectation and anxiety that she has “waited for her ship to come home”. But what follows is an unexpected introduction into the ruthless world of international espionage. 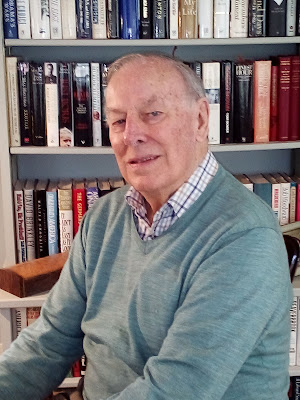 Peter Marshall was born in Wiltshire, educated at Trowbridge High School and began his professional life as a reporter with the Bath & Wilts Chronicle at the age of sixteen, a career which was interrupted by National Service when he joined the Royal Navy. Marshall gained an RNVR commission and served as a Sub-Lieutenant based in Portsmouth and Germany for two years, followed by seven years as a reserve officer.


He moved to Portsmouth and was Deputy Naval Correspondent for the Portsmouth Evening News before becoming a freelance reporter, representing most of the UK national press. He also worked for the BBC as a reporter on radio and TV before joining the BBC staff as a News Editor. He then moved to Visnews, a BBC subsidiary which provided TV news coverage for broadcasters around the world, where he became Executive Editor and then General Manager. During this period, he was elected as Chairman of the Royal Television Society in 1986.


At Visnews (which later became ReutersTV) Marshall played an instrumental and early role in developing the use of satellites for global news coverage, which led him to work in the United States for fourteen years, firstly with INTELSAT and then as President of Keystone Communications (now part of France Telecom’s Globecast network). While in the USA, he served as President of the SSPI (Space and Satellite Professionals International) and on his retirement, he was elected to the Society’s “Hall of Fame” in recognition of his pioneering role in the development of satellite services for international broadcasters.


In his retirement years, Peter Marshall has returned to his “roots” as a journalist, working as co-author and editor of numerous books related to the satellite and space industry with the acclaimed American space scientist and futurist Dr. Joseph Pelton. He went on to write two biographies and a travel book before turning to fiction and drawing on some of his past experiences for this, his first novel.


He now lives in Gillingham, Dorset, where he is currently busy working on a sequel to “The Russian Lieutenant” (as well as editing another biography!). 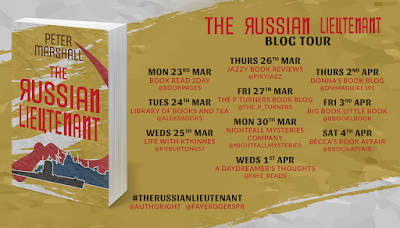 The cover was interesting, in the darker colors of Russia. I loved the choice of lettering, also in a very Russian red. With the sickle in the background, it definitely has the nature of the story.

The Plot:
The Russian Lieutenant was a great story. Although it starts out as a love story, there are so many other interesting aspects to it. It moves along very quickly for a short but enjoyable read that will have the reader turning pages like there is no tomorrow. The drama was very engaging with so many twists and turns.

The Characters:
Our characters were very endearing, especially our main protagonist Marina. She is intelligent, so it is hard to imagine her being so naive. But at the same time, you can't help but hope for her that Nikolai, her handsome officer has some pure intentions. All of our characters were intriguing, even our shady Russian couple. I can't help but love Marina's elderly neighbor. She just seems to really care about the young Marina.

Was it worth reading?:
Yes! It was a quick but intense read that will have you shaking your head, but hoping for Marina, who deserves some love and happiness. I highly recommend The Russian Lieutenant to readers of drama and spy novels and give it 4 out of 5 crossbows.
Posted by Becca's Book Affair at Saturday, April 04, 2020