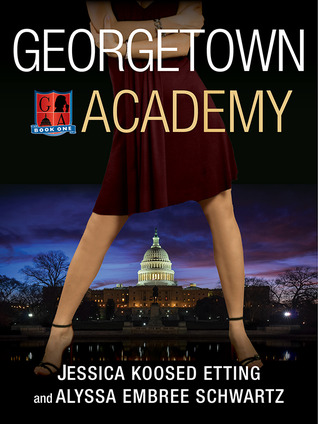 It’s the beginning of a new political administration. That might not mean much at most high schools, but at Georgetown Academy, Washington D.C.’s most elite prep school, January 20th means new alliances, new flings, and new places to party.
While freshmen—nicknamed “interns” for their willingness to jump into bed with anyone higher on the D.C. totem pole—navigate the not-so-friendly halls of GA searching for Algebra and Bio classes, the school’s lifers have other things on their minds.
For self-proclaimed D.C. royalty Brinley Madison (of those Madisons), the first day of school is all about establishing the social hierarchy and playing the part of perfect political wife to her boyfriend, the outgoing Vice President’s son. Too bad he has a wandering eye that puts Bill Clinton’s to shame. Can she keep him, and her own secret vice, in check?
Ellie Walker, Brinley’s best friend, floats through the halls on the arm of golden boy Hunter McKnight (the JFK of GA). But when her ex-boyfriend, Gabe, returns to town and her Senator mother’s political nemesis is reelected, Ellie’s life starts to snowball out of control.
Shy, quiet Evan Hartnett is more into books than beer, and her closet is full of t-shirts and jeans instead of Jason Wu and Jimmy Choo. No one’s ever really noticed her—but she’s been noticing them. When her star rises as an intern at D.C.’s most-watched political news show, she soon finds the two worlds colliding in ways that make her question what’s secret and what’s fair game.
New girl Taryn Reyes is all laid-back, California cool; with a father who’s in line to be the first Hispanic president, she’s ready to dive into the D.C. scene with an open mind. But when her fellow students turn out to be more interested in spreading rumors than making friends, she realizes that forging a drama-free path might be a lot harder than she thinks.
With so many new friends and former flames in the mix, things are bound to get a little heated. And while diplomatic immunity might keep the cops away, there’s not much it can do about the press.
In a town where one teenage misstep can turn into a national scandal, the students at Georgetown Academy will have to be on their best behavior—or, at least, they’ll have to make the world believe that they are.
Because there’s only one rule: whatever you do, don’t get caught.
What’s Cool from Coliloquy:
As the party scene at Georgetown Academy gets under way, authors Alyssa and Jessica let readers decide which of the main girls to follow. You’ll see scandalous behavior, unexpected liaisons, and secret betrayals…all giving you a different perspective as events unfold.
And don't forget to take the Georgetown Academy Quiz!http://bit.ly/VgUgMm

The Cover: While I am reading Season 1, I will comment on the cover of Book 1. The cover to this one looks more adult than YA, that”s for sure. While the US capital is shown in the background, all lit up in the dark. With a shapely pair of legs in a strappy set of heels and a nice skirt. I don't know—seems kinda suggestive to me. I mean, I know women rule the world, but...?

The Plot:  This book seemed very much to be introducing all the characters. Who's who, who's friends, who's enemies, who everyone's parents are. And of course, establishing a kind of baseline. While it seemed to take a long time to get into the actual story, Book 1 was well written and enough to get me into the story. I was so not impressed when it suddenly ended though.

The Characters: The Characters were very well developed. While I took most of the book to be able to figure out who was who and be able to kinda track everyone, I did get to like the characters, even Brinley, who feels she is so special. Ellie and Hunter have to be my favourite, but they just seem way too perfect. I really like Taryn as well, but will she be able to handle GA or will the popularity contest bury her before she even gets going.


Is it Worth Reading?:  Definitely! Book 1 gives the basis for the series. It gives you a taste of the competitiveness and sometimes petty nature of high-school, but 10 times better!! I look forward to Book 2, but recommend Book 1 to readers of YA Contemporary and politics and give it 4 out of 5 crossbows.