The Lover's Secret by J.C. Reed

Brooke Stewart thinks she’s finally safe. After witnessing the crime of a killer, she can move on from her past. But after one night at the Trio Hotel and meeting the sexy stranger with the green eyes that can steal one’s soul, her life is changed forever. Passions run deep. The game is supposed to be for one night with no strings attached.

What she doesn’t know is that the sexy stranger has an agenda of his own. Brooke Stewart has something he desperately wants, something he can't admit to the woman he tries to get to surrender. A secret so deep it would upend her life if she found out too soon. He’s almost reached his goal, and then she gets a letter she was not meant to read. Suddenly, secrets get a completely new meaning.

Is the past really ever the past? 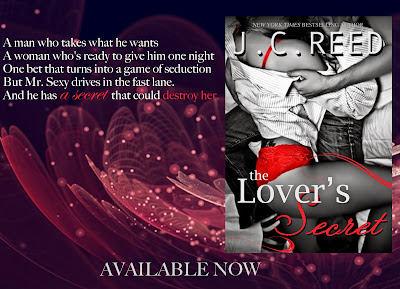 Add it on Goodreads

The Cover: This one was sent to me with the original cover, which I really liked; a darker cover of a muscle-bound, tattooed males chest. But the new cover is different. A couple together; she is focused on him while he is looking away. It is a nice enough cover, but I think I liked the first one better.

The Plot:  The Lover's Secret sounded like an awesome book when I first received the information from Miss Reed. Intrigue, mystery, and romance; I was really looking forward to reading it. The first several chapters left me very confused, but once I figured things out, it was an easy read and there were moments of genius in the plot. I did feel as if I had come into the series in the sequel or in the middle of the story, as our main character, had a whole previous story to tell that I couldn't quite peace together.

The Characters: I was disappointed in the characters. I like a tough heroine, or at least one that seems to think for herself, but I thought Brooke was just way too trusting and easily led, especially after going through what was obviously a very traumatic experience. While I felt empathy and sympathy for our main character, I often thought “oh my gosh, what a twit” because it seemed she couldn't pick up on signs right in front of her face. As well, she seemed given to flights of fancy, going off on a tangent about everything. I downright hated and distrusted Jett right from the first peak in the bar, feeling a lot of disgust. Even through the very length sex scenes, which go on through several back-to-back chapters, I could not appreciate Jett's character even a tiny bit.

Is it Worth Reading?:  No, I found the plot hard to follow at times and just did not get into the story. That being said, The Lover's Secret will appeal to fans of contemporary; it was just not my cup of tea. I give it 3/5 crossbows.