The Book of David by Anonymous 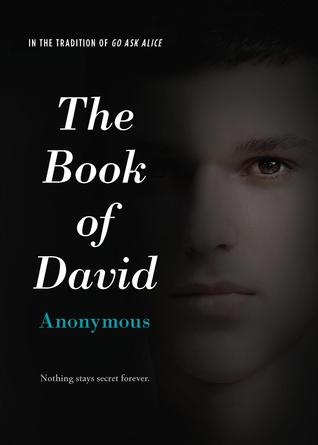 “If you want to keep a secret, you must also hide it from yourself.”
George Orwell, 1984

His secret is his downfall. A riveting, first-person tale in the tradition of Go Ask Alice and Lucy in the Sky.
The author of this fictional diary began writing for a class assignment, but soon it became much more to him. As the star player of his high school football team, he faces a lot of pressure and expectation. Not to mention the secret that he’s harboring inside. The secret that could change everything.
And as David quickly learns, nothing stays secret forever.
His innermost thoughts and feelings are chronicled in the diary he left behind.

The Cover: The cover for this one was dark and brooding. I don't think I would have read the Book of David; the cover was just so off-putting. But I am so glad I did. Don't judge this book by its cover.
The Plot:  The pretense for this one was pretty standard for the kind of high-school drama I have been reading lately. An english writing project or something high-schoolish gone horrible sideways. But the plotline to this one was one I had not encountered before.
The Book of David is written in journal form, a private journal David's english teacher makes them write Monday, Wednesday and Friday, that no one else will read. But David's journal becomes so much more. It becomes the story of a high-school football star, a boy trying to figure out who he truly is, and a emerging love that. like the new buds of spring, either survives the storms or drowns and dies. There is the usual teenage angst about tests and grades, football passes and cheerleaders, but David guards his secret like the government tries to keep Area 51 all hush-hush. What happens when the new kid in class hands him a pen and pretty much makes him question everything in his life?
I don't normally like “journal” stories. But I loved this one. Told by David, a young man experiencing things for the first time, exploring feelings he had kept hidden and locked away even from himself, there is a new spin on a subject that is so controversial.

Characters: I didn't like David at first. Here was a kid whom, on the surface, appeared to have it all. A great life, a good family, truck, cheerleader girlfriend, in his senior year of high-school, preparing for college. He seemed superficial, very fake, and insecure. But as I read and got to know him, I saw nothing was perfect(as it usually never is) and David really was insecure, terrified his best friend would discover his secret. Jon was a favorite, but I liked him right from that first glance in english class. The shy new kid with his own secrets, who knew David and brought him out of his shell, dragging the real David out into the light.
I did not like Monica, until a crucial point. She seemed like a spoilt teenage cheerleader, popular, jock-boyfriend, whom she would push as far as she could, and just always expected things to go her way. I will be really careful here, not to give anything away, but by the end of the book, I really loved Monica.

Is it Worth Reading?:  Oh gods, yes, with a fresh box of Kleenex within reach. Like I said before, this was not normally a book I would ready, but am I ever glad I did. If you read it with an open mind, you get a fresh take on a controversial subject, one that should not be such a big deal. Kids, people should not be afraid to express how they feel. This book had me in tears. But I also experienced the whole range of emotion that a great book, in this case, an exceptional book, will give you. I definitely recommend The Book of David to readers of contemporary and give it 5/5 crossbows.