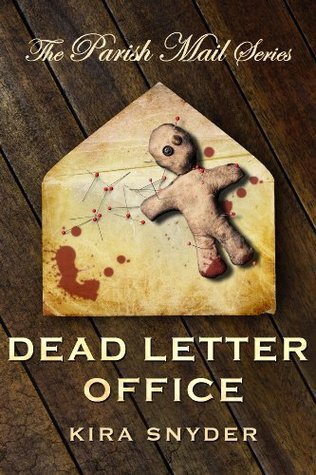 When Celia’s father is killed in Afghanistan, she moves with her mother to New Orleans, the city where her father grew up. Struggling to adjust and haunted by troubling dreams, Celia finds comfort in new friends like Tilly, a practicing witch, and Donovan, the son of police detective. On Halloween, bizarre supernatural occurrences rock the city. Celia meets the mysterious Luc and finds a letter, over a hundred years old, addressed to her.

The paranormal repercussions continue when Celia learns that Luc is the restless spirit of a young man murdered in 1854, only able to assume solid form at night. And then, to her shock, Celia finds that the letter, which describes the suspected murder of a man in 1870, contains uncanny parallels to the present-day death of Abel Sims, a homeless veteran.
With help from Luc, Tilly, and Donovan, Celia races to solve the murder—and the mystery of the letter—using both magical and forensic clues.
This is an Active Fiction title
"Active fiction" is a new type of e-reading experience that allows the reader and the author to interact with each other and the text in new and different ways.
Kira has written Parish Mail like a TV series–there are over-arching mystery and romantic story arcs that extend between the episodes, while each episode has a smaller case that is presented and solved. Along the way, she asks you, the reader, to make several small decisions as you read. These choices do not impact the overarching storyline, but certain combinations “unlock” clues to the series’ mystery, which are embedded in the text. Kira also asks you to cast a vote at the end of the episode, to get additional feedback from her fans about their preferred love interests in future episodes.


My Thoughts:
Dead Letter Office is an Active Fiction book which encourages reader engagement and serial storytelling. When I first started the book this frustrated me. My thought was “pick-your-path? Ah, no, thank you.” But, as I got further into the story, I actually liked it.
When Celia Jane Mccarty’s marine father is killed in Afghanistan, her whole world changes. Not only must she deal with the loss of her dad, but her mom decides they will move to New Orleans, where he grew up.
Right from the get-go, things are definitely spooky. When Celia attends her father’s funeral, an extremely emotional part of the story I might add (translation-grab your Kleenex) she happens upon another man being laid to rest. She notices a small red bag in his hands, and her grandmother tells her it’s a gris-gris bag, filled with “bits of bone and powder, blessed by a voodoo practitioner. It’s to protect his spirit” Her grandmother says this like she is telling her what’s for dinner. Then, on Halloween, things take a turn for the worst, and Celia and her friends, a police detective’s son and a practicing witch, must follow the clues to solve a murder that mirrors one from decades before. Nothing freaky weird about murder; the freaky weird part is the way that Celia becomes involved.
The storyline was fairly good and kept me on my toes throughout. There were 3 or 4 times when I had a choice of what the heroine was going to do. It was neat to be able to have my input into the story. Each choice gave a different clue to the murder, and apparently, some decisions that the reader makes affect the next book. I am very curious of course to read the next one, Post Mortem. This opportunity to make decisions in the story makes me want to read the book again to see what happens if I make the other choice.
I found Dead Letter Office to be a very interesting mystery. I was actually freaked out as I was reading it and unable to put it down, anxiously awaiting the next ghost appearance or creepy occurrence. Young readers of paranormal mysteries will definitely enjoy Dead Letter Office.
Have you read any Active Fiction books? If so, what book and what do you think of this feature?